The 2019.1 release of the Thinkwise Platform features a lot of improvements and additions, and over 100 feature requests and issues have been addressed. The most important changes are listed in this post. A complete list of all changes can be found in the Thinkwise Community Portal.

No changes were made here, so the required SQL Server and .NET Framework support remain the same as in the 2018.3 version.

This release changes some basic templates using a generated SET NOCOUNT ON statement. This statement is now followed by a semicolon (;). This makes it possible to write certain statements, for example a with-statement, without having to use a semicolon first.

Subroutines containing the word convert have been renamed so they now contain conv, so you may have to adjust your own dynamic code.

This release contains the first version of unit tests in the Software Factory. Unit tests can be written for the following logic concepts: defaults, layouts, contexts and badges. The following image shows the unit test screen. This is the place to create, maintain and execute unit tests.

The list on the left side shows all the objects for which unit tests can be written. Badges are used to show the amount of existing unit tests. After selecting the correct object and logic type a unit test can be created. A title and description can be filled even as if the unit test should succeed or not with the checkbox Should abort. After saving, parameters can be added. A distinction has been made between input and output parameters because the output parameters will be checked after the unit test has been executed. In addition, the expected messages can be specified. These will also be checked after performing a unit test.

Unit tests can also be created, maintained or executed from the Functionality modeler. The list is filled with all the unit tests that are directly connected with the program objects on the result page. For example, when a default procedure is created for Employee to combine the first and last name to display name, the written unit test that validates the email address is also shown in the list. Also, all unit tests are shown that have the selected control procedure linked as primarily.

Roles in the Software Factory​

The configuration of roles is moved out of IAM, into the Software Factory. The new screens for this feature can be found in the menu under the new menu group Access control.

The first screen present in this menu group is Roles. Here, it is possible to execute a task to import the roles out of IAM, to the Software Factory. This needs to be done for one time only. So when upgrading to the 2019.1 version, it is not necessary to import the roles again in the 2019.2 version. When skipping the upgrade to the 2019.1 version, upgrading directly to the 2019.2 verion, it still is necessary to import the roles for one time. Make sure this is done before synchronizing your project version to IAM. It is also possible to create or copy new roles, or to delete roles. Assigning role rights to objects can be done in the same way as it was done in IAM.

The second screen in this menu group is called Model rights. This screen is optimized by using another screen type, which makes better use of the available space.

This screen also contains the tab page New objects, which shows all new objects created in the project version. There is a Go to object task available, which leads to the corresponding record in the Model rights screen. 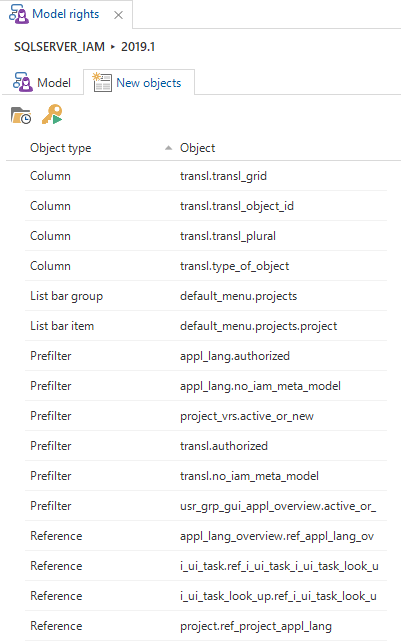 One of the screens present in this menu group is Synchronize to IAM. 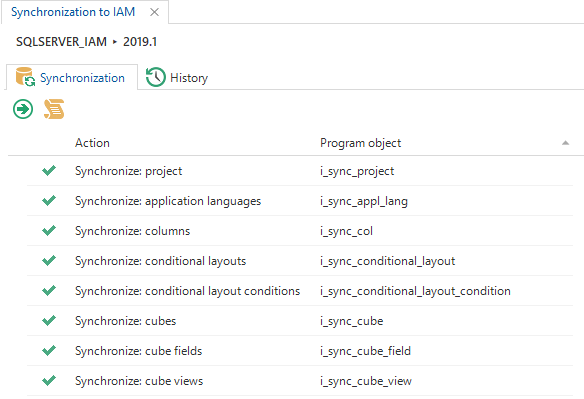 The second new screen in this menu group is Deployment package. This screen looks a lot like the Synchronize to IAM screen, only here a deployment package can be created. After execution, the following actions will be executed:

Both screens contain a tab page in which the history can be found. Should it occur that a synchronization or deployment session gets locked by staying active for too long, it is possible to reset the lock using a Reset lock task.

Look-up control can now be set to Combo (sorted). This will present the values in the combo using the sorting of the look-up table. The look-up control type Combo has been renamed to Combo (alphabetical) to reflect the difference between the two combos.

After a project upgrade there will be asked if a new project version must be created.

Translations will be copied automatically when renaming an object.

CLR functions can now be defined and generated as table-valued.

It is now possible to set if a validation may be approved or not. By default it is not possible to approve errors, but this can be changed.

This also goes the other way around. By default it is possible to approve information messages or warnings, but this can also be changed. This is already done for some validations, mostly because there already is a task available to solve the validation (for example the approve subname task). This is done for the following validations:

There are no new IAM features implemented in this release.

In the 2019.1 situation there is also a value 2. This value is not displayed in this table because it is only used as a parameter in layout functionality.

Further data model changes for the Software Factory and IAM meta-models are listed here. This overview be used as reference to fix dynamic control procedures, dynamic model code or custom validations after an upgrade.